Interpreter for English Weddings in Verona

Is it your dream to get married in Verona? Let us help you to make this dream come true.  Do you need an interpreter for a wedding in English or even in another language?

If you don’t speak Italian, the Italian regulations require the presence of an interpreter to act as an intermediary between all parties: the celebrant, the bride and the groom.

If the couple are not able to understand the language in which the wedding ceremony is to be conducted it would be advisable for them to consider engaging an interpreter.

We can help by forwarding the necessary papers and putting you in touch with the relevant offices.

Our translation agency, established in Verona for over 25 years, also specializes in providing   interpreters for weddings. We can provide you with a professional interpreter in the language required.

If you want to get married in Verona the first thing to do is to contact the authorities who will inform you of the documentation required (birth certificate, certificate of no impediment, etc.)

After that you will have to choose the wedding venue of which there are several in Verona. The most popular are listed below.

The story of Romeo and Juliet is the story of a tragedy caused by the feud between their two families: the Montague and Capulet.

When Romeo Montague and Juliet Capuleti first meet during a ball at her father’s house they fall in love. However they are devastated to discover that their families are sworn enemies.

After their meeting, Romeo – who is standing beneath Juliet’s balcony – overhears his beloved  professing her love for him. Then, upon making his presence known to her, they decide to be married by Friar Laurence who hopes to reunite the two families through this marriage. Romeo goes to celebrate with his friends but driven by the family code of honour kills Tybalts who had previously killed Romeo’s dearest friend Mercutio. The Prince of Verona banishes Romeo to Mantua under penalty of death should he return to Verona. Romeo hides in Juliet’s chamber for the night where they consummate their marriage.

Capulet, unaware that Juliet is already secretly married, decides to arrange a marriage to Count Paris threatening to disown her if she refuses.  Juliet whose pleas to delay the wedding are rejected by her mother seeks out Friar Laurence for help. The Friar decided to give Juliet a potion that makes her appear dead and to inform Romeo of the plan so that he could rescue her when she awakens.   Unfortunately,   Romeo, unaware of the friar’s plan because the message does not reach him and, upon  learning of Juliet’s death from his servant, returns to Verona and goes to the Capulet Crypt.

Here, he encounters Count Paris who tries to prevent him from entering the tomb. During the struggle, Romeo accidentally kills Paris and finds Juliet in the burial vault. There, after giving her a final kiss, he kills himself.   Juliet, on awaking and seeing Romeo dead, kills herself too.

The families, after learning of their children’s demise, agree to reconcile and to end their violent feud. 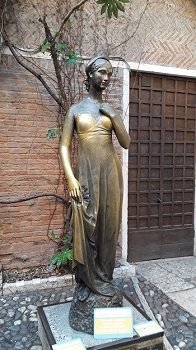 The residence comprises of a tower with a view onto via Cappello and a two-storey building accessed through a courtyard. The interior of the house has been completely restored by architect Antonio Avena between 1937-1940.  These restorations were intended to recreate the original setting.  In addition to the exposed brick façade one can find a Gothic door, trefoil windows, frescoes, paintings and ceramics. 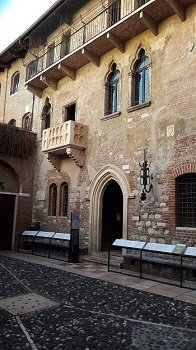 Palazzo della Ragione is a majestic quadrangular building with an internal courtyard, located in the south-east corner of the ancient Roman forum, between Piazza delle Erbe and Piazza dei Signori.

It was built in the last years of the 12th century to accommodate the Municipality’s new magistrates, incorporating various pre-existing buildings, and featuring an impressive defensive tower on each of the four corners.

This group of buildings, surviving over the centuries, has now been renovated and  found its rightful place as an organic and harmonious whole.  The Palazzo, symbol of the city’s power; the Torre dei Lamberti, symbol of temporal power, the decorated treasure of the Chapel of the Notarie; and the Scala della Ragione, the heart of the courtyard of the Mercato Vecchio. 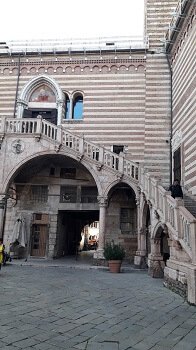 This fifteenth-century Chapel of the Notaries is located on the second floor of what was once the Tower of the Masseria (on the corner of Via Cairoli and Via Dante). It consists of four communicating rooms covered with ribbed vaults set on a Gothic arch, decorated with large paintings on canvas in the form of lunettes and oval paintings fixed to the vaults, made by the Veronese painters Alessandro Marchesini, Giambattista Bellotti, Sante Prunati and the French painter Louis Dorigny at the turn of the eighteenth century.  The walls under the paintings are covered with valuable wood panelling of refined nineteenth-century manufacture. 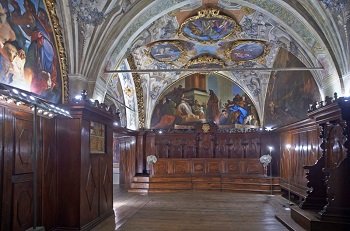 Hall of the Muses and Giacomo Galtarossa Hall

In 1935 Antonio Avena, the director of the Civic Museums, opened to the public the so-called “Juliet’s Tomb” where, legend has it, the ark holding Juliet’s body had been placed.

The adjoining Museum of the Frescoes (opened in 1973) exhibits  frescoes from Veronese buildings from the Middle Ages to the 16th century and sculptures from the 19th century, while the church of S. Francesco houses large-scale works on canvas from the 16th to the 18th century.

In the Hall of the Muses a room from a 16th-century Veronese palace, Palazzo Guarienti ai Filippini, has been reconstructed by resiting the frescoes decorating its walls in their original arrangement. The subject of this cycle of paintings has not yet been fully clarified, although a number of mythological or allegorical figures are recognisable: Mercury with a caduceus, Venus with two heroes, Diana the huntress, the allegory of Fame with a trumpet, and representations of river gods and water nymphs.

On the ground floor is the spacious Giacomo Galtarossa Hall, named after the most important patron of Veronese museums in the second half of the twentieth century and first president of the Friends of the Museums of Verona. 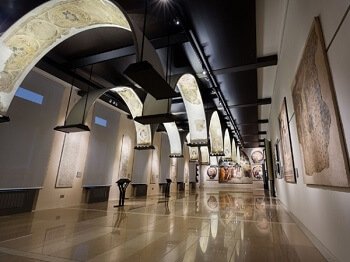 Piazza Bra is one of the most beautiful squares in the world, surrounded by monuments from various eras that create a magical and evocative atmosphere: the imposing Arena, the seventeenth-century Palazzo della Gran Guardia, the Liston  and the neoclassical Palazzo Barbieri, which houses the seat of the Municipal Administration.

Located on the north-east side of the square, Palazzo Barbieri is an imposing neoclassical building  built between 1836 and 1848 when Verona was part of the Austrian Empire. It was designed by the engineer Giuseppe Barbieri, whose name it bears today. Although the interior of the palace is now almost entirely occupied by administrative offices, there are some rooms in which works of art are kept that would be well worth a visit.

The Tapestry Room, which takes its name from the precious artefacts that were placed there after World War II, is furnished with two enormous late 16th-century canvases. The first, on the wall facing the windows, depicts Supper in the House of Levi and comes from the refectory of the Venetian convent of San Giacomo alla Giudecca. It is a work from Veronese’s workshop, and is attributed by critics to Benedetto and Carletto Caliari, the younger brother and son of the great Paolo. The second canvas is a work by Paolo Farinati representing the Victory of the Veronese over the troops of Federico Barbarossa. 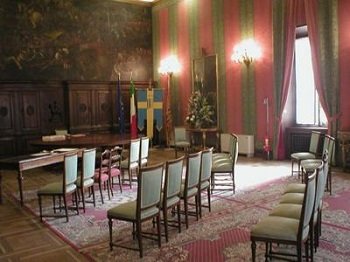 Why choose one of our interpreters?

All too often, wedding planning agencies do not specialise in providing professional interpreters and this can put the best day of your life at risk.

That is why it is important to turn to an interpreting agency that can handle your request in the best possible way.   We can provide you with a professional English wedding interpreter for your ceremony. Our simultaneous translation service is the perfect way to aid communication during your wedding. Our service is tailored to your particular need with a focus on attention to detail.

To know more about our English wedding interpreter services, contact us at: info@eurotraduzioni.com. We will give you all the information you need, without obligation.

Via Salvo D’Acquisto 17/A